Guys, it’s been over a year since I turned 5, and you know what that means: cheese! (I celebrate everything with cheese; see the tablecloth for evidence.) Also, it means I just turned 6. And by “just,” I mean two and a half months ago because my ghost writer is slower than me putting on my shoes on a weekday morning. 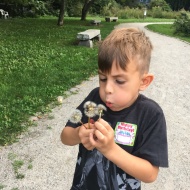 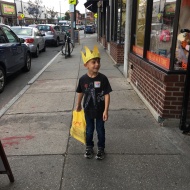 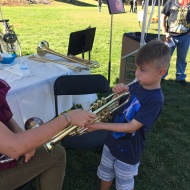 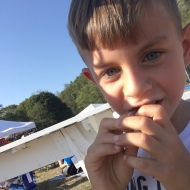 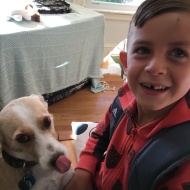 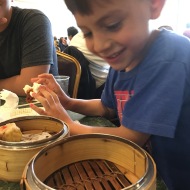 Anyway, I’ve really matured as a young man, as you can see by this year’s interview:

Pants. I know I’ve asked this before, but why do we have to wear them?

Star Wars. If the Imperial March isn’t the soundtrack to your life, then maybe you need to reexamine things. Think of how much more powerful you’d feel coloring, playing with Legos, jumping off the third stair, or (not) brushing your teeth with “Dun dun dun dun-ta dun, dun-ta DUN!” playing in the background. You’d probably be president by now instead of Dumbhead McPoopypants. Besides Star Wars’ music, I also like light sabers, my mini Darth Vader, Star Wars books (I can “read” Star Wars Rebels without even looking at the pages), and Star Wars themed foods, even though Mama insists they taste the same as their non-Star Wars themed equivalents.

Cheese. You know when the server at a restaurant is grating parmesan on your pasta and asks you to tell them when to stop? I STILL HAVEN’T TOLD THEM TO STOP.

Rosie. Rosie’s my dog and she’s the CUTEST. You have to say “CUTEST” in your highest voice because that’s how we talk about Rosie. She likes giving me kisses, right on the mouth. She also likes when I shriek, “ROSIEEEEEE!” and listening to the Imperial March, or at least, she hasn’t said otherwise.

Post Its. This is the #1 item on the Christmas wish list I sent to Santa. That and paper and tape. I like writing love letters (really short ones), drawing pictures (really small ones) and making books (really hard to read ones) on them.

Tablet Time. Tablet time is everything. I play Subway Surfer, Rolling Ball, and Candy Crush Saga. You know, educational games. Mama makes me read before I can have Tablet Time, so now I am pretty much Doogie Howser, only instead of being a doctor, I’ll be a Jedi, because all I read are Star Wars books. I have a Kindle but Hazy has a Leapfrog so she’s jealous, which is the greatest thing that’s ever happened to me.

p.p.p.s. And look at this drooling baby 3-year old me.