Special bonus fun facts are in my 5-year interview video below:

This is the third video in this series. You can compare my answers at age 4 and age 3.

There are a lot of great fathers out there, but we’ve got a clear favorite: he’s the seven time winner of #1 Dad, the World’s Best Farter & Father, our very own…DADA!

We got the band back together (literally) for one last time, Dada, to perform our new hit single, Farter’s Day. Happy Farter’s, we mean, Father’s Day, Dada.

I’m so old, I didn’t even have a bounce house party this year. I had a spy party, and my secret agent name was Chief Agent and Georgie’s was Agent Junior and we talked on walkie talkies and saved Princess BooBooButt’s royal jewels.

Here’s some other stuff that I do now that I’m 7:

For more, see my latest video:

On today’s episode, we answer another question from fan favorite Brad R. Warning: this episode contains mature content like kissing and high fives.

If you have a question for a future episode, please leave it in the comments section. Not on Facebook!

Guys, it’s been a while since the highly anticipated Season 2 launch of Ask Hazy. We’ve been in production on new episodes for quite a bit, and I think this one is timely. I’ll cut to the chase: I’d make a great president.

You can learn more about my platform in Episode 2: President Hazy.

2. I also want to ride the city bus to school. Mama says I’ve already done this, but these are my resolutions and this is our blog, so FACE.

I mean, I can draw, but maybe could do better. (These are smiley faces.)

Mama also suggested some other resolutions for us, namely being nicer to each other and trying more new foods, but we’ll stick to the above. Thanks anyway, Mama.

Once again, we got out our satiny caftan loungers, wig collection, and squid hat, and shot our annual holiday card. The photo shoot involves a lot of yelling by Mama and Dada about staying on our marks (whatever that means), looking “over here,” and smiling, so much smiling. 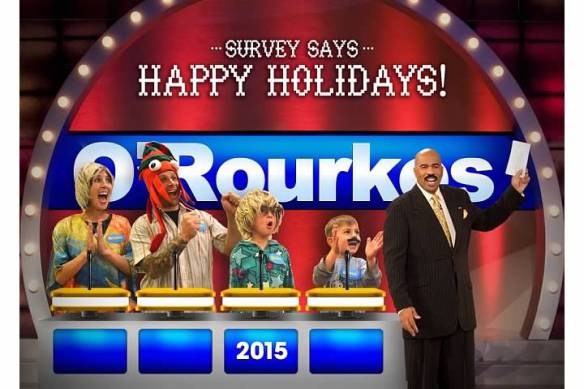 You try smiling while someone maniacally yells, “Smile!”

Here’s the back of the card: 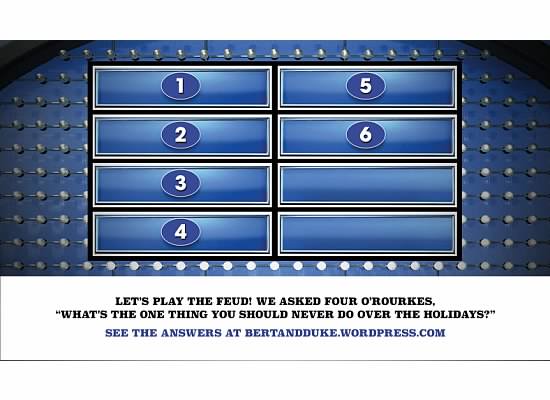 And as promised, here are the answers to, “What’s the one thing you should never do over the holidays?”:

We don’t know what they’re talking about with the crying.

Do you remember what it was like when you were 4? I do, because I am. It’s a pretty exciting age, because you can do EVERYTHING yourself, including PUTTING ON YOUR OWN TOOTHPASTE, GETTING YOUR OWN WATER OUT OF THE FRIDGE DISPENSER, USING A KNIFE, and yelling at your parents about how you can indeed do all these things BY YOURSELF. Also, I can read, or a tleast fake it really, really well based on the powers of memorization and train passion.

Here’s where I tell you everything you need to know about my life:

In case you wondered, this is what little 3-year old me had to say about similar topics. And here’s what Bert was like when she was 4.

You read that right. This was the last known picture taken of me when I was three:

I was so young then.

I wanted a Frozen Jakomas and his Neverland Pirate Railway Friends themed party with a bumblebee cake (naturally), but since Mama failed to find that specific Pinterest board, we went with a Minions theme for my party. 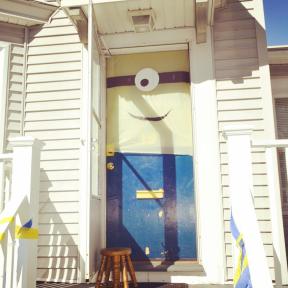 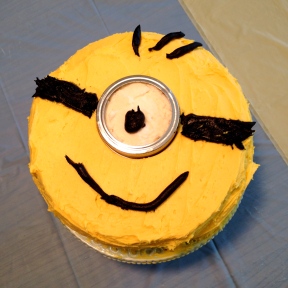 First, we played Pin The Party Hat on the Minion, which is about as cool as it sounds, except you have to admit the blindfold was pretty sweet. 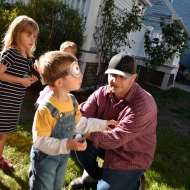 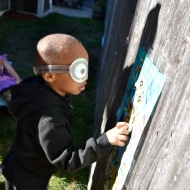 Then we had Magic Mike come, but not that Magic Mike. This Mike was from Abrakidabra, and he was pretty hilarious. He did real magic, like swapping peanut butter and jelly jars and making coins come out of Evie’s ears, but also silly magic, like putting a diaper on my head and calling it a magic hat. 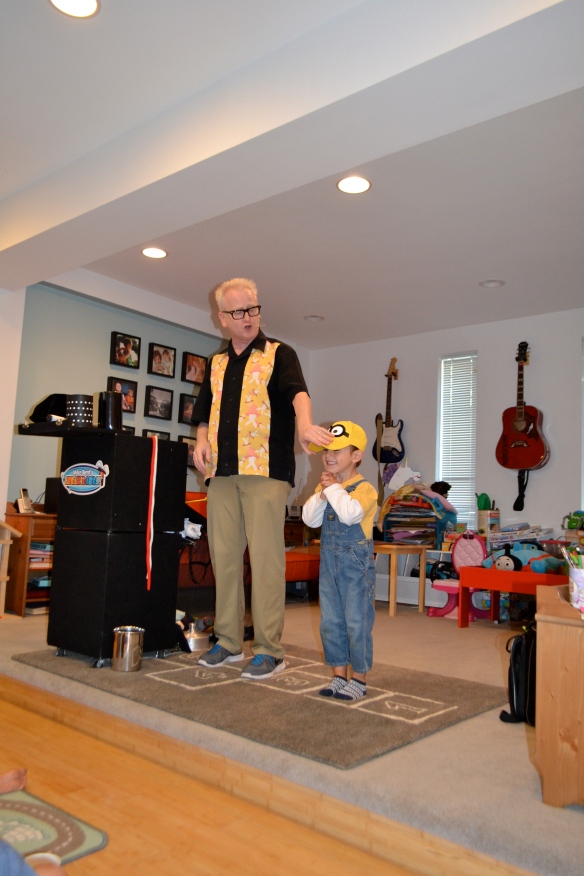 I got to be an assistant!

Nothing magic about this hat, except if you put it in the washing machine.
[DON’T DO THAT.]

I know what you’re thinking: kids laugh at everything. But come on, diaper on my head? HAHAHAHAHAHAHAHA! 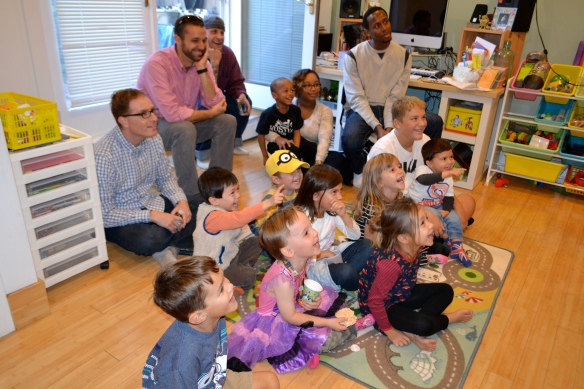 Diaper. On. My. Head. Still laughing.

That’s not all we did though.

We “became” Minions, and by that I mean we stuck our faces in this opening, not that we served anyone in any way. 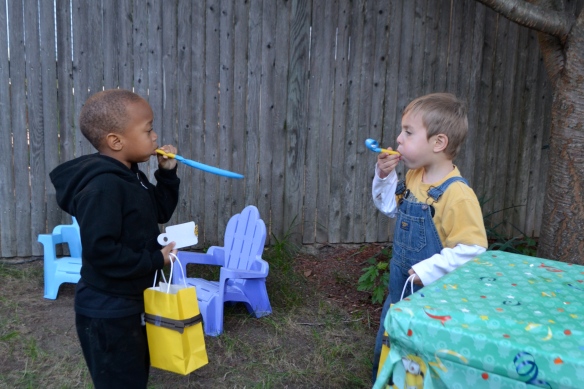 My buddy Quentin and I blew these things at each other. 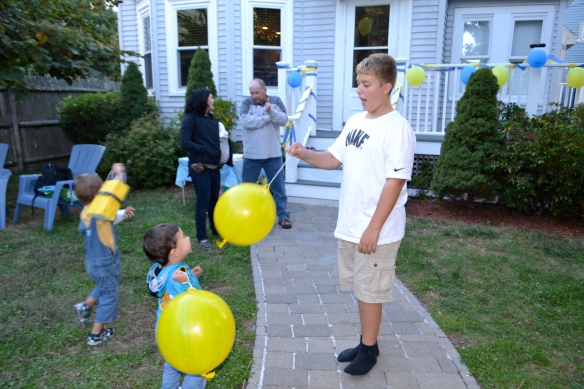 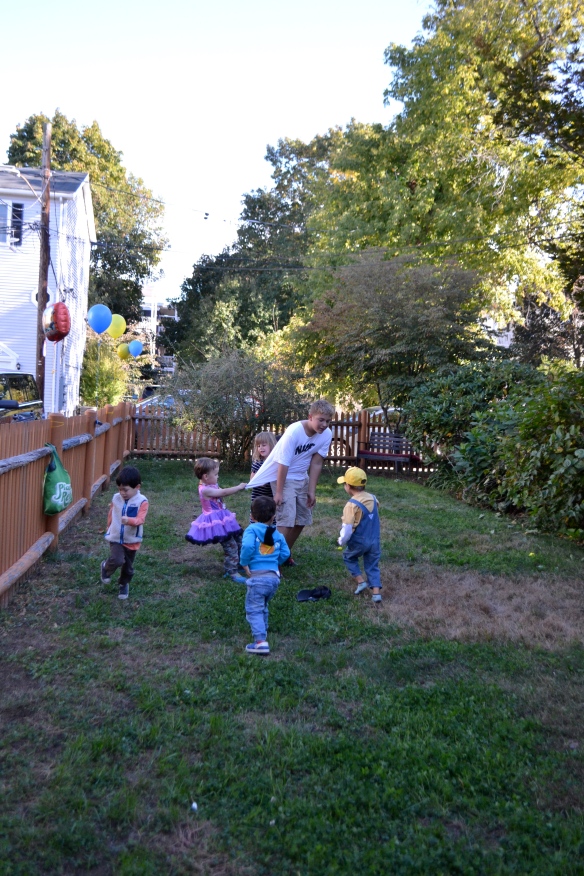 Then we all attacked Sean-O with our bodies and ignored Mama yelling, “Don’t rip Sean-O’s shirt!” 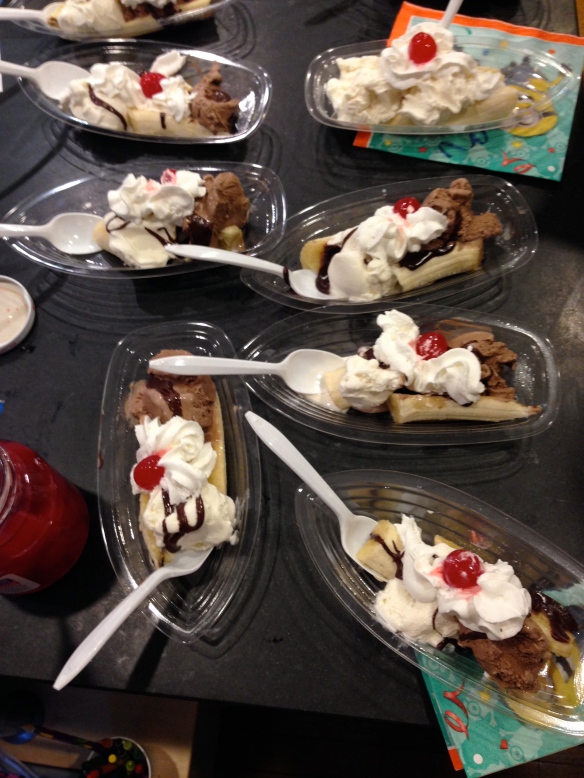 We had bah-nah-nah splits. That’s how the minions say it. 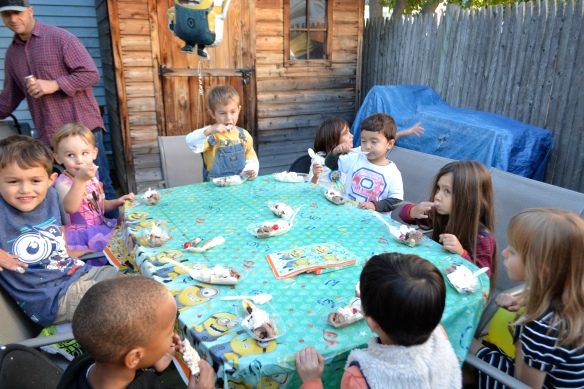 Except for one kid whose ice cream got infected by banana-flavor.

And, you better believe I ate that cake. Even if it wasn’t a bumblebee.

Thanks for the “help”, “friends”, but I’m cool being the only one spitting all over my cake.

Believe it or not, that was just the day before my birthday. On my actual birthday, Hazelbert got up early to make me breakfast. 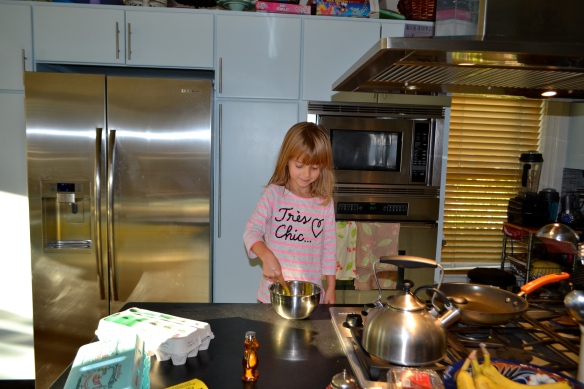 She made my favorite: Opa’s Eggies. 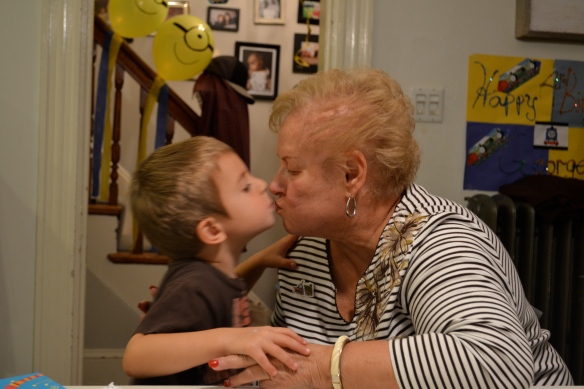 Grammy stayed over, just so she could give me a smooch. (Okay, and hang out.)

Dada did this. Yikes, Dada.

And I got my presents from Mama, Dada, and Hazy which included train tracks, a train book, a Jake doll, a Hazy original painting, and a smooch.

I’ll be filming my 4th Birthday interview as soon as the producers get their acts together. Let me know if there’s anything you want to know about 4-year old me, besides whether or not I’m still awesome. (I am.

It’s been a while since we’ve done a fashion show. Here we are modeling our back to school clothes:

Our runway walks are totally self-taught, btw. America’s Next Top Model, Cycle 36, anyone?